Award-winning Philippines journalist Maria Ressa has told CNN that her arrest on “cyber libel” charges is an example of how the law is being “weaponized” against critics of the country’s President.

Ressa was released on bail Thursday after her lawyer paid the 100,000 Philippines peso bail ($1,915) fee after she spent the night in detention.
Speaking to CNN’s Kristie Lu Stout, Ressa said the law was “draining … democracy dry.”
“The only thing I can think of is that the government wants me to feel its power,” she said, adding that she felt her rights had been violated.
The co-founder and editor of online news outlet Rappler — which has gained prominence for its unflinching coverage of President Rodrigo Duterte and his brutal war on drugs — was arrested Wednesday at the Manila newsroom shortly after 5pm. 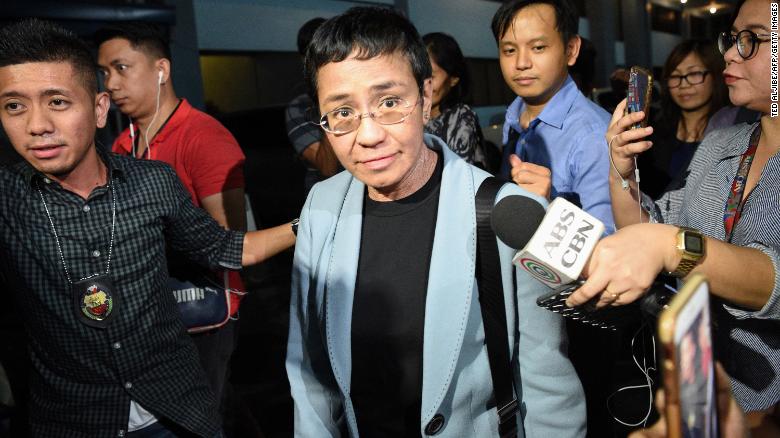 Journalist Maria Ressa leaves her Manila office after she was arrested on February 13, 2019.
Ressa was charged with a lawsuit relating to a story written in 2012, which alleged that businessman Wilfredo Keng had links to illegal drugs and human trafficking. However, the article was published by Rappler two years before the new cyber libel laws came into effect in the Philippines.
“Constitutionally you can’t have a law go retroactively,” said Ressa, a 2018 Time Person of the year. “I’m being set up as an example so that others will stop asking tough questions and I think that puts responsibility on me to continue asking tough questions.
“I’m not a critic, I’m a journalist. I’m doing my job holding the government to account.”
On her release, Ressa — who was already out on bail following tax evasion charges filed against her last November — made an impassioned speech about freedom of the press, calling her case an “abuse of power.”